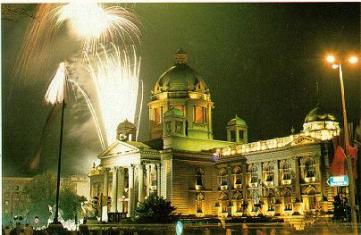 The Serbian coalition government, with moderate nationalist Vojislav Koštunica as Prime Minister–has collapsed following dissension within the multi-party governing coalition over the “loss of Kosovo.” Voters will go to the polls to elect a new government on May 11th having to make a stark choice in the polling booth: whether to side with the nationalists in their struggle to forestall Kosovar independence, or to vote in a more moderate pro-European government, thereby placating not only members of the European Union but calming the nerves of wary international investors, who have become the life-blood of the Serbian economic system. As reports reports:

…The coalition government collapsed at the weekend, with nationalist Prime Minister Vojislav Koštunica blaming disunity over the conflicting goals of pursuing European Union membership versus defending Kosovo, the province which seceded last month with EU backing.

“Right now, around 1.0 billion euros worth of investments have been put on hold,” [Deputy Prime Minster Božidar] Djelić said. “There is a growing risk perception considering that some parties want to halt Serbia’s road to Europe. The elections will be a choice between Europe and investors are extremely careful.”

Heavily reliant on foreign investment for growth, Serbia is believed to need between 3.0 billion and 5.0 billion euros a year to ensure solid economic growth, single digit inflation and financing of its current account gap of 16 percent of GDP.

“In the absence of the required level of foreign investment, foreign creditors could also decide to put on hold lending to Serbian companies,” said Pavle Petrović of the FREN/CEVES thinktank said.

“The resulting crisis would lead to forcible reduction in external gaps through inflation, currency depreciation, a fall in output and wages. In that case, the central bank could soothe and postpone, but not eliminate the crisis,” he said.

Today in intro to IR, we discussed the role of individuals in international politics.  On Friday, we’ll look at the policy debate on page 152 of Mingst, where the debate question is “Should ‘bad’ or ‘corrupt’ leaders be forcibly removed by the international community?  Mingst provides arguments for and against.  What about not only removing them, but having them assassinated?  Two economists–Ben Olken and Ben Jones–have decided to take a look at the link between assassinations and other factors such as democratization and economic growth.  What have they found?

…In “Hit or Miss? The Effect of Assassinations on Institutions and War,” Olken and Jones looked at the effects of political assassination, using a strict empirical methodology that takes into account economic conditions at the time of the killing and what Olken calls a “novel data set” of assas­sination attempts, successful and unsuccessful, between 1875 and 2004.

…In “Do Leaders Matter? National Leadership and Growth since World War II,” Olken and Jones explored whether “individual political leaders make a difference in economic growth.” This is tricky business for the researcher because, as Olken explains, a country’s economic situa­tion can affect the election of a leader: when the economic outlook is good, for instance, presi­dents are more likely to be reelected. [This is the problem of endogeneity–JD] So Olken and Jones looked at 57 leaders who died in office from accidents or natural causes and “found big changes in growth when autocratic leaders die in office—both positive and negative,” but no sub­stantial change when democratic leaders died in office. “The results suggest,” they write, “that individual leaders can play crucial roles in shap­ing the growth of nations,” provided they are ruling with minimal or nonexistent checks and balances to their power (think Augusto Pinochet or Robert Mugabe).