You may also have awoken this morning to reports of  a potentially ‘game-changing’ deal between the United States and China, which pledges to reduce greenhouse gas (GHG) emissions. [Note: the US media likes to use the sports-derived phrase ‘game-changing’ to refer to significant events.]  This is certainly a significant development in the politics of climate change. Indeed, the two countries are the world’s largest emitters of GHGs and until today the two have been engaged in a game of what Paul Harris has called “you go first!” From the looks of it, they have both chosen to ‘go first’.

According to news reports, here are some of the details:

[President] Xi committed China to begin reducing its carbon dioxide emissions, which have risen steadily, by about 2030, with the intention of trying to reach the goal sooner, according to a statement released by the White House.

China, the world’s largest greenhouse-gas emitter, also agreed to increase its non-fossil fuel share of energy production to about 20 percent by 2030, according to the White House.

Is the negotiated agreement ideal? Not nearly. China will still be increasing its total GHG emissions until about 2030. Despite this, however, the deal has been met with some praise from environmental groups for the symbolic significance of the deal, which makes the potential for getting a positive deal agreed in Paris next year more likely.

Jake Schmidt, director of international programs for the Natural Resources Defense Council, a Washington-based environmental group, said no other countries can have as big an impact on the climate debate as the U.S. and China.

“They shape how the market invests,” he said. “They’ve also been two of the most difficult players in the history of the climate negotiations so the fact that they are coming out and saying they are going to take deep commitments will be a powerful signal to the rest of the world.”

Of course, not everyone is happy. Soon-to-be US Senate Majority Leader, Mitch McConnell (R-KY) is outraged: 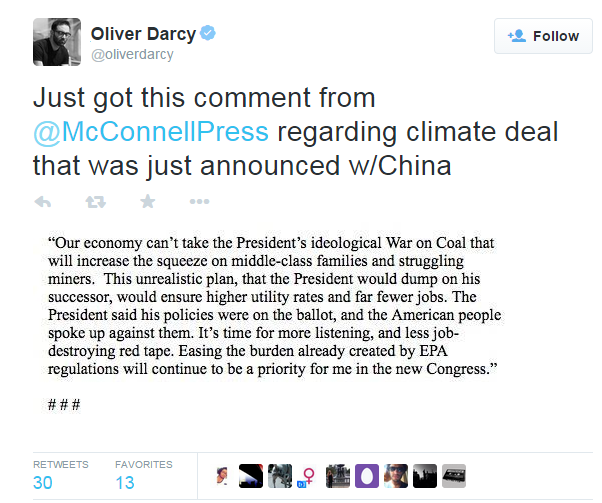