“Friendship is the only cement that will ever hold the world together. There must be, not a balance of power, but a community of power; not organized rivalries, but an organized peace.”

You can’t get a more concise expression of Wilsonian liberalism (idealism).  King Abdullah II of Jordan spoke to an audience at the Woodrow Wilson School of International Affairs on the subject of peace in the Middle East.  Here are his remarks in their entirety.  (H/t to A. Gunlicks) 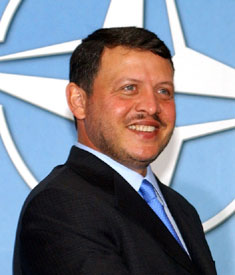 Fifty-seven countries are not at peace with Israel today.

Fifty-seven countries out of 193 countries in the world.

Fifty-seven countries with a total population greater than Europe and the United States combined.

Fifty-seven countries, representing one third of the members of the United Nations.

Fifty-seven countries for whose citizens the conflict in Palestine is the issue of their time.

We must, therefore, ask the important question. What are the implications for global stability if this continues?

END_OF_DOCUMENT_TOKEN_TO_BE_REPLACED

The Gallup Polling outfit has a new book out based on a massive (over 50,000 respondents) recent poll on attitudes amongst the world’s approximately 1.3 billion Muslims. Let us allow the publishers to describe the content themselves: 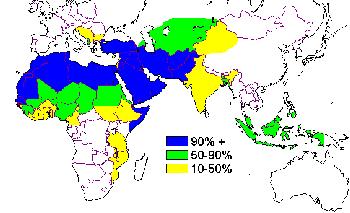 Gallup’s largest study of Muslim populations worldwide challenges conventional wisdom and the inevitability of a global conflict as the wars in Iraq and Afghanistan continue. Despite widespread media coverage of global terrorism from America and Europe to the Middle East and Asia, little is known about what majorities of the world’s Muslims really think and feel. What do Muslims say about violence and terrorist attacks? What do they say about democracy, women, and relations with the West? What are their values, goals, and religious beliefs?

In the wake of the terrorist attacks on 9/11, U.S. public officials seemed to have no idea whether or not many Muslims supported the bombings. This troubled Gallup Chairman and CEO Jim Clifton, who felt that “no one in Washington had any idea what 1.3 billion Muslims were thinking, and yet we were working on intricate strategies that were going to change the world for all time.” Clifton commissioned his company to undertake the enormous job.

The result is Who Speaks for Islam? What a Billion Muslims Really Think, based on six years of research and more than 50,000 interviews representing 1.3 billion Muslims who reside in more than 35 nations that are predominantly Muslim or have sizable Muslim populations.

Some of the more intriguing findins?

Note: the map above is from Professor Juan Cole.  The colors refer to the percentage of inhabitants of each state who are Muslims.

In PLSC250, we have discussed both Samuel Huntington’s prediction of the nature of the new world order (as outlined in his “Clash of Civlizations” thesis) and Yahya Sadowski’s response (“Political Islam: Asking the Wrong Questions”). David Ignatius has written an op-ed piece in the Washington Post today, which amounts to a book review of former CIA officer Marc Sagerman’s new book, “Leaderless Jihad.” Find some excerpts posted below. How does Sagerman’s view fit with the views expressed by Sadowski in his article?

Sageman has a résumé that would suit a postmodern John le Carré. He was a case officer running spies in Pakistan and then became a forensic psychiatrist. What distinguishes his new book, “Leaderless Jihad,” is that it peels away the emotional, reflexive responses to terrorism that have grown up since Sept. 11, 2001, and looks instead at scientific data Sageman has collected on more than 500 Islamic terrorists — to understand who they are, why they attack and how to stop them.

The heart of Sageman’s message is that we have been scaring ourselves into exaggerating the terrorism threat — and then by our unwise actions in Iraq John McCain, that, as McCain’s Web site puts it, the United States is facing “a dangerous, relentless enemy in the War against Islamic Extremists” spawned by al-Qaeda. making the problem worse. He attacks head-on the central thesis of the Bush administration, echoed increasingly by Republican presidential candidate

The numbers say otherwise, Sageman insists. The first wave of al-Qaeda leaders, who joined Osama bin Laden in the 1980s, is down to a few dozen people on the run in the tribal areas of northwest Pakistan. The second wave of terrorists, who trained in al-Qaeda’s camps in Afghanistan during the 1990s, has also been devastated, with about 100 hiding out on the Pakistani frontier. These people are genuinely dangerous, says Sageman, and they must be captured or killed. But they do not pose an existential threat to America, much less a “clash of civilizations.”

It’s the third wave of terrorism that is growing, but what is it? By Sageman’s account, it’s a leaderless hodgepodge of thousands of what he calls “terrorist wannabes.” Unlike the first two waves, whose members were well educated and intensely religious, the new jihadists are a weird species of the Internet culture. Outraged by video images of Americans killing Muslims in Iraq, they gather in password-protected chat rooms and dare each other to take action. Like young people across time and religious boundaries, they are bored and looking for thrills.

“It’s more about hero worship than about religion,” Sageman said in a presentation of his research last week at the New America Foundation, a liberal think tank here. Many of this third wave don’t speak Arabic or read the Koran. Very few (13 percent of Sageman’s sample) have attended radical madrassas.

Today in intro to IR, we discussed the role of individuals in international politics.  On Friday, we’ll look at the policy debate on page 152 of Mingst, where the debate question is “Should ‘bad’ or ‘corrupt’ leaders be forcibly removed by the international community?  Mingst provides arguments for and against.  What about not only removing them, but having them assassinated?  Two economists–Ben Olken and Ben Jones–have decided to take a look at the link between assassinations and other factors such as democratization and economic growth.  What have they found?

…In “Hit or Miss? The Effect of Assassinations on Institutions and War,” Olken and Jones looked at the effects of political assassination, using a strict empirical methodology that takes into account economic conditions at the time of the killing and what Olken calls a “novel data set” of assas­sination attempts, successful and unsuccessful, between 1875 and 2004.

…In “Do Leaders Matter? National Leadership and Growth since World War II,” Olken and Jones explored whether “individual political leaders make a difference in economic growth.” This is tricky business for the researcher because, as Olken explains, a country’s economic situa­tion can affect the election of a leader: when the economic outlook is good, for instance, presi­dents are more likely to be reelected. [This is the problem of endogeneity–JD] So Olken and Jones looked at 57 leaders who died in office from accidents or natural causes and “found big changes in growth when autocratic leaders die in office—both positive and negative,” but no sub­stantial change when democratic leaders died in office. “The results suggest,” they write, “that individual leaders can play crucial roles in shap­ing the growth of nations,” provided they are ruling with minimal or nonexistent checks and balances to their power (think Augusto Pinochet or Robert Mugabe).

In class on Wednesday, we’ll be analyzing the individual level of analysis in international relations. Do individuals matter? In other words, do they have an effect independent of the state and systemic levels, or do individuals lie at the periphery of international relations? Margaret Hermann–a political psychologist–has found that that leaders can be characterized based on a host of personality characteristics. Some of these are nationalism, need for power, need for affiliation, distrust of others, etc. On the basis of a composite of these characteristics, Hermann believed that leaders were more likely to have one or the other of two foreign policy orientations–independent leader, participatory leader. Watch these two clips and think about how you would characterize Chávez’s and Bush’s foreign policy orientations, respectively.

The Global Perspectives box on p. 146 in Mingst, asks the following questions:

The same could be asked of President Bush:

Here is a map that is unlike any of the maps of the world that I’ve posted previously. The obvious difference is that the whole of the world’s land mass is an undifferentiated white. What this map shows is the impact of human beings on (the destruction of) the world’s oceans and seas. From Science Now

Four years in the making, a groundbreaking new map of the state of the world’s oceans was released today, and its message is stark: Human activity has left a mark on nearly every square kilometer of sea, severely compromising ecosystems in more than 40% of waters.

The map, presented here at the annual meeting of the American Association for the Advancement of Science (publisher of ScienceNOW)–and published tomorrow in Science–combines 17 anthropogenic stressors, including coastal runoff and pollution, warming water temperature due to human-induced climate change, oil rigs that damage the sea floor, and five different kinds of fishing. Hundreds of experts worked to weigh and compare the stressors, overlaying them on top of maps that the scientists built of various ecosystems, with data obtained from shipping maps, satellite imagery, and scientific buoys. Then marine scientists modeled how different ecosystems would be affected by the stressors, mapping so-called impact scores onto square-kilometer-sized parcels worldwide. The scores correspond to colored pixels on the new map.