Here is a map that is unlike any of the maps of the world that I’ve posted previously. The obvious difference is that the whole of the world’s land mass is an undifferentiated white. What this map shows is the impact of human beings on (the destruction of) the world’s oceans and seas. From Science Now 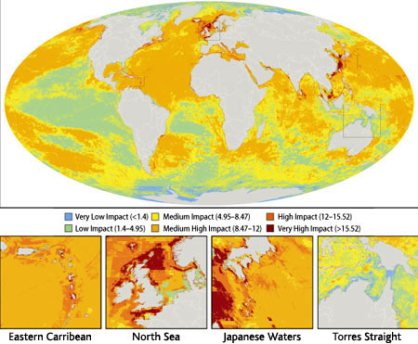 Four years in the making, a groundbreaking new map of the state of the world’s oceans was released today, and its message is stark: Human activity has left a mark on nearly every square kilometer of sea, severely compromising ecosystems in more than 40% of waters.

The map, presented here at the annual meeting of the American Association for the Advancement of Science (publisher of ScienceNOW)–and published tomorrow in Science–combines 17 anthropogenic stressors, including coastal runoff and pollution, warming water temperature due to human-induced climate change, oil rigs that damage the sea floor, and five different kinds of fishing. Hundreds of experts worked to weigh and compare the stressors, overlaying them on top of maps that the scientists built of various ecosystems, with data obtained from shipping maps, satellite imagery, and scientific buoys. Then marine scientists modeled how different ecosystems would be affected by the stressors, mapping so-called impact scores onto square-kilometer-sized parcels worldwide. The scores correspond to colored pixels on the new map.