The most important international political event occurring this week is arguably the independence referendum in southern Sudan. Despite clashes a couple of days ago along the border separating the north and south, which left dozens dead, the New York Times reports that voting is peaceful. As The Globe and Mail’s Geoffrey York notes, while the referendum may ultimately lead to a new state being created in the south, the cost “has been horrific.”

Southern Sudan has been consumed by devastating wars for most of the past half-century. An estimated 2.5 million people have perished in those wars, with atrocities on all sides that were shocking in their cruelty.

After decades of indifference by most of the world, the irony is that Southern Sudan suddenly became a fashionable cause over the past decade. Its oil exports became lucrative, forcing the north and south to try to settle their conflict in order to protect their revenue flows. Simultaneously, there was a rapid escalation of U.S. diplomatic pressure on both sides, including the threat of sanctions – partly because evangelical Christian lobbyists had persuaded Congress that it needed to protect the south’s Christians from Muslim persecution.

Here’s a fascinating set of maps creating by the BBC to show that the north and south of Sudan differ in more than simply ethnicity and oil wealth. 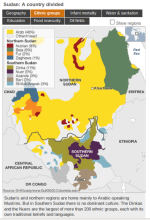 Here’s a report from Al Jazeera about some of the important issues related to the referendum: