Wednesday, March 14th, 2012 will stand as a watershed moment in international relations and in international law, specifically. Thomas Lubanga, former militia leader in the eastern Democratic Republic of Congo (DRC) is the first person ever convicted by the recently formed International Criminal Court (ICC). Though there have been dozens of convictions of war crimes suspects from the wars in the former Yugoslavia and Rwanda, these cases were process by temporary courts–the ICTY and the ICTR, respectively–and not the ICC. Lubanga was accused of conscripting, enlisting, and using child soldiers in the conflict in the Ituri region of the DRC. Rather than playing a role in the post-war political process, (which he had hoped) Lubanga was arrested in March 2005 and extradited to the ICC one year later. It is only now, seven years after his arrest, that a verdict on this case has come down.

Lubanga’s conviction is the end of a multi=year trial process, the legitimacy of which was undermined at times by the lack of prosecutorial professionalism, and other issues. For more about the trial, go here, and watch the videos below.

We discussed Tom Weiss’ book–Humanitarian Intervention–in IS 302 today. We spent some time on the changing nature, and number, of peacekeeping operations since the end of the Cold War. Below is a map listing the 16 current UN peacekeeping operations. You can find the source image, which is clickable, here.  How many of these operations are proceeding under the auspices of Chapter VII of the UN Charter? 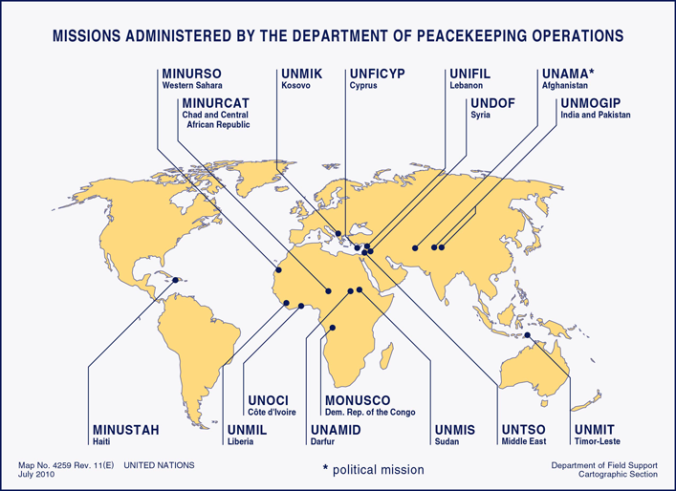 Here is part of the textof the UNSC resolution, authorizing the establishment of MONUSCO in the Democratic Republic of the Congo: