On Thursday, September 23rd we will begin to analyse the exceptionally important concept–the state. It will become strikingly obvious that a strong state is a necessary–but not sufficient–condition for political stability, political and personal liberty, democracy, and economic well-being. Conversely, citizens living in weak, failing, or failed states face lives of economic destitution, personal insecurity (think of Hobbes’ state of nature, where life is nasty, brutish, and short), and lack of basic rights and freedoms. The Fund for Peace publishes an annual index of failed and failing states. A quick look at the results over the last decade or so finds that the same dozen or so states are continually at the top of the list of failed/failing states. Here is a map depicting the results of the most recent index: 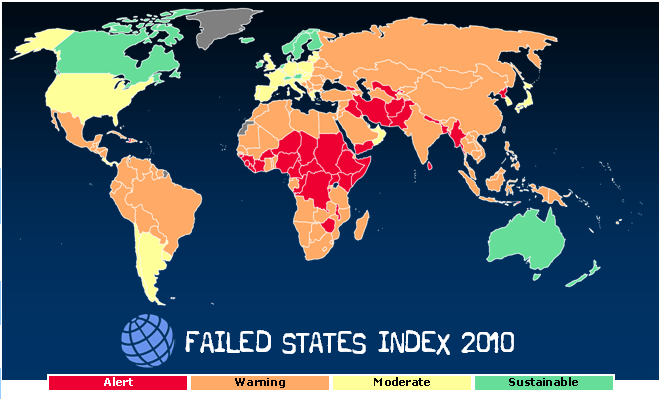 Notice the geographical concentration of failed states (in red). Why are the vast majority of the world’s failed states found in central Africa and southwest Asia?

What are the characteristics of failed states that distinguish them from more stable states? Maybe this video of life in Somalia will provide some clues: