There is a new article [paywall] in the most recent issue of the American Political Science Review written by Michael L. Ross entitled “Oil, Women, and Islam.” Ross has written a lot about the nexus between resources and regime type, the so-called “resource curse” phenomenon. In this article, Ross argues that the well-known empirial link between lack of women’s rights and Islam washes away once controls related to oil production are incorporated into statistical models. (Note that the analysis is restricted to the Middle East.)

Here is the abstract and a couple of his charts:

Women have made less progress toward gender equality in the Middle East than in any other region. Many observers claim this is due to the region’s Islamic traditions. I suggest that oil, not Islam, is at fault; and that oil production also explains why women lag behind in many other countries. Oil production reduces the number of women in the labor force, which in turn reduces their political influence. As a result, oil-producing states are left with atypically strong patriarchal norms, laws, and political institutions. I support this argument with global data on oil production, female work patterns, and female political representation, and by comparing oil-rich Algeria to oil-poor Morocco and Tunisia. This argument has implications for the study of the Middle East, Islamic culture, and the resource curse. 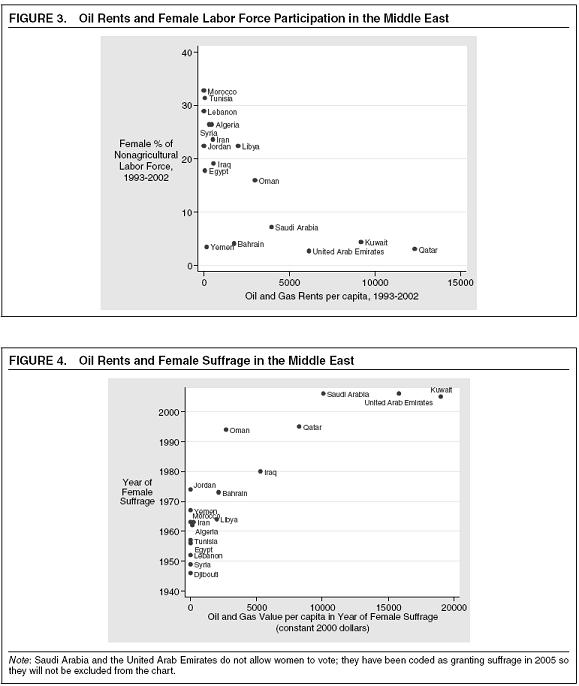 We’ll be playing the “Oil Game” in class tomorrow in PLSC250. When colleagues of mine used this teaching tool in their classes 4 or 5 years ago, the price of oil was about 1/3 of what it is today. In the clip, Brian Williams will tell you that oil reached a “record” high of $100.01 US a barrel. That’s only true if we’re talking about nominal dollars. In terms of real dollars it still has about 4 USD/bbl to go to hit the all-time high set in December 1979. Hmmm…I wonder what was happening in late 1979? Iran, Afghanistan, plus ca change…

“People are afraid that there is just not enough oil in the world to meet demand; demand which is coming not only from the United States but from emerging economies like China and India.”

(Image from the San Francisco Chronicle)

In a piece published today New York Times op-ed columnist, Nicholas Kristof, addresses the link between China’s foreign policy goals and the continuing genocide in the Sudanese region of Darfur. Hundreds of thousands have been killed or have died from starvation, disease and malnutrition, and millions have been displaced, whether internally or as refugees abroad, for which, Kristof argues, China bears some moral culpability. Kristof is not alone in this view and the NGO, Olympic Dream for Darfur, has decided to try to do something about it by establishing the “Genocide Olympics” campaign, which is meant to shame China into changing its policies toward Sudan.* Will this work? Is it good foreign policy? Is it morally acceptable to mix sport with politics? Remember, there is historical precedent for this type of thing as the United States boycotted the 1980 Moscow Olympics in retaliation for the Soviet invasion of Afghanistan. Quoting Kristof:

The Beijing Olympics this summer were supposed to be China’s coming-out party, celebrating the end of nearly two centuries of weakness, poverty and humiliation.

Instead, China’s leaders are tarnishing their own Olympiad by abetting genocide in Darfur and in effect undermining the U.N. military deployment there. The result is a growing international campaign to brand these “The Genocide Olympics.”

This is not a boycott of the Olympics. But expect Darfur-related protests at Chinese Embassies, as well as banners and armbands among both athletes and spectators. There’s a growing recognition that perhaps the best way of averting hundreds of thousands more deaths in Sudan is to use the leverage of the Olympics to shame China into more responsible behavior.

The central problem is that in exchange for access to Sudanese oil, Beijing is financing, diplomatically protecting and supplying the arms for the first genocide of the 21st century. China is the largest arms supplier to Sudan, officially selling $83 million in weapons, aircraft and spare parts to Sudan in 2005, according to Amnesty International USA. That is the latest year for which figures are available.

As the highlighted portion of the quote above implies, China is acting in a fundamentally realist manner, eschewing moral concerns in order to increase its power and security.

*Please do not refer to Sudan as the Sudan, or to Ukraine as the Ukraine, but Sudan and Ukraine, respectively, as they are no longer regions within colonial empires, but are independent states in their own right. Adding the in front of their country names is anachronistic.