In intro to IR, we’ll analyze the role of IGOs, NGOs, and international law in international politics.  Arguably the most important IGO is the United Nations Security Council (UNSC)  Today, the UNSC voted (14-0) to impose tougher sanctions against Iran as a result of that country’s continued pursuit of nuclear weapons.  From the New York Times: 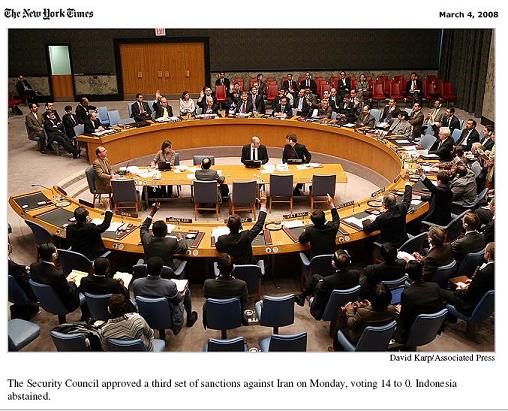 UNITED NATIONS — The Security Council on Monday adopted its third resolution imposing sanctions on Iran for its refusal to cease enriching uranium, an activity that the West suspects Iran may be using to create fuel for a nuclear weapon.

The previous two measures gained the unanimous support of the 15-member panel, but in balloting on Monday Indonesia abstained, saying it “remained to be convinced of the efficacy of adopting additional sanctions at this juncture.” Fourteen countries voted in favor.

The resolution authorizes inspections of cargo to and from Iran that is suspected of carrying prohibited equipment, tightens the monitoring of Iranian financial institutions and extends travel bans and asset freezes against persons and companies involved in the nuclear program.

It adds 13 names to the existing list of 5 individuals and 12 companies subject to travel and asset restrictions. The new names include people with direct responsibility for building fast-spinning centrifuges that enrich uranium ore and a brigadier general engaged in “efforts to get around the sanctions” in the two earlier resolutions.

Notice two things: first, the use of “targeted sanctions.”  Second, the story byline reads “United Nations”, not New York.  I wonder if this is standard practice for stories originating from the United Nations headquarters in New York.  Does anyone know?