We had a (sometimes spirited) discussion in intro to comparative yesterday about patriotism, nationalism, citizenship and immigration. You may, therefore, find today’s story in the New York Times about a young 11-year-old lad who was born in Ireland and is about as culturally Irish as they come, except for the fact that his African born parents are illegal citizens in Ireland. As a result, his parents face the prospect of being exiled back to Africa, which would force the boy to go also. Quoting the NYT: 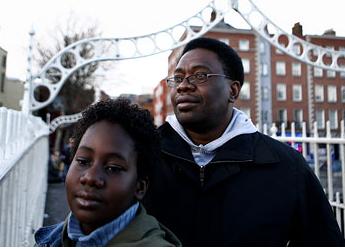 DUBLIN — Cork-born and proud of it, George-Jordan Dimbo is top to toe the Irish lad. He studies Gaelic, eats rashers, plays hurling, prays to the saints, papers his walls with parochial school awards, and spends Saturdays at the telly watching Dustin the Turkey, a wisecracking puppet, mock the powerful.

If the Irish government has its way, he may soon be living in Africa.

George, 11, is an Irish citizen and has been since his birth when Ireland, alone in Europe, still gave citizenship to anyone born on its soil. [Do you remember what the legal term for this is?] His mother and father, Ifedinma and Ethelbert Dimbo, are illegal immigrants from Nigeria, who brought him back to Ireland three years ago, judging it the best place to raise him.

Since then, the unusual trio — the Irish schoolboy and his African parents — have shared a single room in a worn Dublin hostel while facing a prospect dreaded by children on both sides of the Atlantic, a parent’s deportation.

“Dear justice minister,” George wrote when he was 9. “I heard my Mommy and Daddy whispering about deportation. Please do not deport us.”

P.S. Bonus points for anyone who can tell me what rashers are!