The very first Afrobarometer Briefing Paper–here’s the link to a PDF version–(April 2002) presents some key findings regarding the views of African residents in about a dozen African countries on phenomena such as democracy, freedom, governance, etc. Here are a few I found interesting:

Whereas about one-half of survey respondents think that corruption among public officials is common (52 percent), about one-third think it is rare (35 percent). Perceived corruption is highest in Ghana, Nigeria, Tanzania, and Zimbabwe, and lowest in Botswana, Lesotho and Namibia. Generally, however, people perceive more corruption than they themselves have personally experienced. Such perceptions, and the social inequalities they reflect, tend to corrode satisfaction with economic reform policies and with democracy.

In class, I use the module on economic and political development as an opportunity to ask students if they have ever tried to bribe an official for any reason whatsoever. The answer amongst my mostly suburban-bred American students is a unanimous “no.” Generally only I (and sometimes a foreign student) raise our hands to answer in the affirmative. I try to impress upon the students that bribery and corruption is a normal part of life in most non-Western countries. In most citizens’ dealings with official (read: governmental and quasi-governmental) institutions, bribing at least one official is absolutely necessary to get anything done.

Asked “which group do you feel you belong to first and foremost?” Afrobarometer respondents cited occupations (e.g. farmer, trader, etc.) more often than ethnic identities (27 percent versus 25 percent). Overwhelmingly, people express pride in their self-defined group identity and do not consider that it conflicts with national identity. Countries vary considerably, however: whereas occupational identities predominate in Tanzania and Uganda, ethnicity remains the most important in Nigeria and Namibia. And in Zimbabwe, Zambia and South Africa, people are prone to think that the government treats their group unfairly. 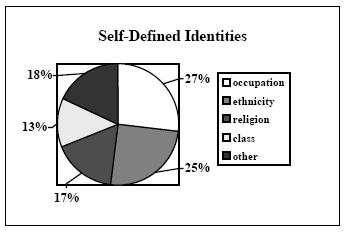