Are individuals of a certain political attitude orientation more likely to be happy than those with competing political attitudes?  The short answer, in the United States at least, may be yes; moreover, self-defined conservatives seem to be much happier (or at least claim they are) than are liberals, and extremists of either group are happier than moderates.  From the Economist: 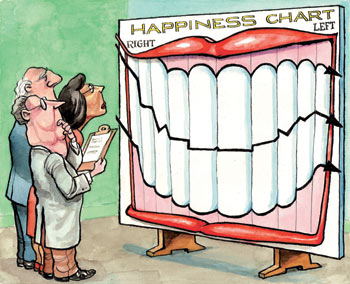 In 2004 Americans who called themselves “conservative” or “very conservative” were nearly twice as likely to tell pollsters they were “very happy” as those who considered themselves “liberal” or “very liberal” (44% versus 25%). One might think this was because liberals were made wretched by George Bush. But the data show that American conservatives have been consistently happier than liberals for at least 35 years.

This is not because they are richer; they are not. Mr Brooks thinks three factors are important. Conservatives are twice as likely as liberals to be married and twice as likely to attend church every week. Married, religious people are more likely than secular singles to be happy. They are also more likely to have children, which makes Mr Brooks confident that the next generation will be at least as happy as the current one.

When religious and political differences are combined, the results are striking. Secular liberals are as likely to say they are “not too happy” as to say they are very happy (22% to 22%). Religious conservatives are ten times more likely to report being very happy than not too happy (50% to 5%). Religious liberals are about as happy as secular conservatives.

Why should this be so? Mr Brooks proposes that whatever their respective merits, the conservative world view is more conducive to happiness than the liberal one (in the American sense of both words). American conservatives tend to believe that if you work hard and play by the rules, you can succeed. This makes them more optimistic than liberals, more likely to feel in control of their lives and therefore happier. American liberals, at their most pessimistic, stress the injustice of the economic system, the crushing impersonal forces that keep the little guy down and what David Mamet, a playwright, recently summed up as the belief that “everything is always wrong”. Emphasising victimhood was noble during the 1950s and 1960s, says Mr Brooks. By overturning Jim Crow laws, liberals gave the victims of foul injustice greater control over their lives. But in as much as the American left is now a coalition of groups that define themselves as the victims of social and economic forces, and in as much as its leaders encourage people to feel helpless and aggrieved, he thinks they make America a glummer place.