The New York Times reports on a new poll released by the Pew Forum on Religion and Public Life, which shows a relatively high level of fluidity in the religious identities of residents here in the United States. Analysts and scholars of the role of religion in public life have long understood the US exceptionalism with respect to the important role and place of religion in public life. This has occurred despite (although some would argue because of) the official church-state separation in US society. Most other states with developed economies are much more secular than is the United States, even though some of these states (such as Great Britain and Germany) do not have state/church separation.

The main take-home message of this new Pew Poll, I think, is the fluidity of religious identity here in the United States, where religion is more individualized and personalized and really becomes a type of individual identity. (Remember in Chapter 3 of O’Neil where we differentiated between individual and group identity and discussed whether religious identity could be both.) Conversely, in countries like France, Great Britain, Germany, etc., religion is much more a social–i.e., group–(rather than a religious) identity and is, therefore, much more immutable. Here is an excerpt from the article, with a graphic: 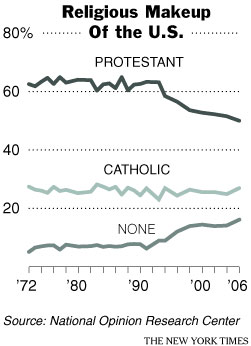 WASHINGTON — More than a quarter of adult Americans have left the faith of their childhood to join another religion or no religion, according to a survey of religious affiliation by the Pew Forum on Religion and Public Life.

The report, titled “U.S. Religious Landscape Survey,” depicts a highly fluid and diverse national religious life. If shifts among Protestant denominations are included, then it appears that 44 percent of Americans have switched religious affiliations.

For at least a generation, scholars have noted that more Americans are moving among faiths, as denominational loyalty erodes. But the survey, based on telephone interviews with more than 35,000 Americans, offers one of the clearest views yet of that trend, scholars said. The United States Census does not track religious affiliation.

It shows, for example, that every religion is losing and gaining members, but that the Roman Catholic Church “has experienced the greatest net losses as a result of affiliation changes.” The survey also indicates that the group that had the greatest net gain was the unaffiliated. Sixteen percent of American adults say they are not part of any organized faith, which makes the unaffiliated the country’s fourth-largest “religious group.”

That 44 percent of Americans have switched religious affiliation is astounding. What are the implcations of this? I can think of two immediately…